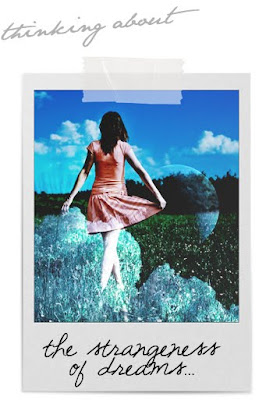 So I had this weeeeird dream the other night. I dreamt that my husband kept bringing home this long-haired blonde woman from work every night. They'd hold hands and go off to the movies and dinner and she'd tower over him like some kind of sasquatch. How did I know she was at least 6' tall? Because she towered over me and I'm half a foot taller than he is. Finally I had enough and started getting mad he was cheating on me so openly while insisting they were just friends. So he admitted they were more than friends and that it was okay for me to cheat too. But only if it was with another brunette woman. And only if he and his gigantic blonde girlfriend from work could watch. When I told him this story he thought it was hysterical. All I wanted to know was what the hell I'd eaten before bed to 'cause such a crazy mindfuck of a dream.

I certainly have no insecurities about my husband cheating. I'd have to pry his hands off of me long enough for him to find someone else and that is almost impossible. ;)

The true strangeness of it was actually the fact that I had a dream at all. Since the baby came along I'm never asleep long enough without violent interuption to really dream. But we're hitting that stride where suddenly (after a year!!!) she's slept through the night a few times. It's been [singsong voice]AWESOME[/singsongvoice]!

So the Best I've Read event has ended and I'm anxiously hoping I've won something but it's doubtful. But I am so thankful to Andrea Cremer and Julie Kawaga for both posting and mentioning the event on their blogs 'cause it drew my attention to it. I had so much fun reading the interviews and checking out the blogs involved. I am looking forward to seeing it repeated in 2011. Did any of you, my followers, happen to join in?

Meanwhile, I really should be cleaning. Scrubbing toilets, vacuuming, wiping out the fridge. Yep, the manfolk are arriving this weekend. We're having our cousin and a couple of our guy friends out for the holiday so there will be a lot of beer and making fun of one another starting Sunday. Years ago I learned the best way to hang with guys and thrive is to learn how to talk a lot of shit, develop a taste for beer and know the line between being "like one of the guys" and being "a guy". No matter what you are still a girl and farting in front of your guy friends is a no-no. The only way to recover from a farting-in-front-of-the-guys mishap is to be fortunate enough to be pregnant and unable to control your gas. ha!

So any special advice for surviving a house full of men, children and animals for two weeks in subzero temperatures?

And speaking of men folk... you simply MUST head over to TheOddShots, collective blogness of Meljean Brook, Ilona Andrews, Jill Myles, Patrice Michelle and Nalini Singh. You see, darling Meljean needs help! Help Meljean Eat Bon-Bons, Save the Future, and Win a Prize! I should have known better than to start in with this but I couldn't help it. Then another commenter used the words "manly fashion" together and it always makes me think of Firefly and even though I am thinking of the wrong character saying the line it made me think of Nathan Fillion and well... weirdness has ensued. But it's entertaining and silly and well... you should really just go over there and see what everyone has come up with.

So anyway enough with my Firefly/Castle (no new epi this week gorramitalltohell) obsessions distracting me from the whole purpose of the weekend reading thread!

What are you reading this weekend guys? I am slogging at Unraveled again. Less than 100 pages to go and my heart ain't in it. I didn't love the first one either but I liked it better than this one. I'm finishing it more out of respect for Gena than anything. I think it's maybe just not for me as a series. It happens sometimes.

I'm also trying to cram Delirium into the next day for the YAD2 reading challenge. I just haven't had time to fit it in. I mean, I did meet my goal of 2 books but well, I feel like I should have done more. *sulks* Honestly I doubt I will have any time to read in the next week with cleaning, company, kids out of school and the holiday. *sigh* And all I want to do when the weather is this nasty (we're dropping below 15 tonight) is curl up with coffee/tea/cocoa, my cat and a book. Pathetic eh?

Well folks, I'm writing this Thursday night as Friday I am literally bombed with errands and stuff. Hope your weekend rocks! I'm heading to bed. -- Rhi
Posted by Rhianna at 12/17/2010