A Season of Sharing 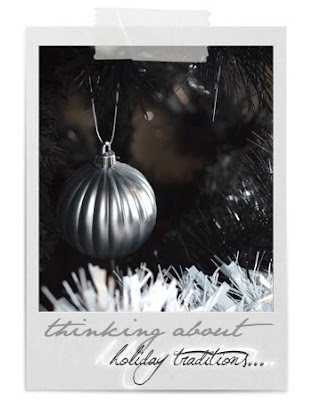 All weekend I was thinking about the traditions our family has established at Christmas time. From specific movies we watch on Christmas Eve to the underwear we buy the kid every year since the year he cried because he thought all he was getting was underwear! I don't know, maybe it's because I'm a bit of a nostalgic person but tradition is important to me. I've already stocked up on the traditional chocolate oranges for the toes of the stockings. It was awful the year no one had any left TWO WEEKS before Christmas! Real oranges just aren't as fun. It's our tradition and the holiday just isn't the same without it.

This weekend we're supposed to decorate our tree. We put it up right after Thanksgiving only to discover half the branches aren't lighting up. Damn pre-lit POS. :P Hell with it, we can't afford a new one this year and once we get all of our garland, balls and family ornaments on it you don't notice it really. I remember when I was a kid I would get so mad if my gramma decorated her tree before I could come over to help. So one year she bought a tiny plastic tree just for me to decorate. It became a tradition after that! 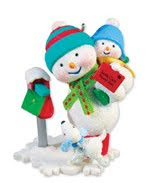 When I was very young I was super into ballet but my dance school wouldn't let me do it until I was older so I eventually gave up on it. But every year someone made sure I got to see The Nutcracker. Now we have a tradition of buying a nutcracker for our son each year. The other night he snuck out into the living room and took all of the smaller ones into his room. Mysteriously several of them now need a tube of super glue. Meanwhile, I started a new tradition last year for the baby. When my husband was little every year his mom bought him an ornament with a mouse on it. Each one reflects something from the year he got it. There's a bowling one from when he was little and into bowling. My favorite is from the year we got married, it has two mice sitting on a swing under mistletoe and it says "Our Christmas". It's the last one she got for him. So I decided I wanted to buy the baby a special ornament each year only hers will be snowmen. This year it's a "mommy" snowman and "baby" snowman on her back going to the mailbox with a letter for Santa and there's a puppy running with them. Since baby goes with me to get the mail on warm days and we got the puppy this year I thought it was perfect.

What are your family's traditions dear readers? I've been hearing about some from friends and strangers that I just love. My stepkid's other family usually opens their presents on Christmas Eve and the special one is always a set of new pajamas that they wear that night.

I didn't get a lot of time to read over the weekend so I didn't bother with my usual Weekend Reading post. Not that I didn't plan to or start one. I spent the afternoon with my MIL on Saturday shopping for Christmas and trying not to cave and buy Matched by Ally Condie when I saw it at Barnes and Noble. I did drag her over to the humor section to show her the Porn for Women books I have on the Chronicle Books Happy Haul-idays list. We were laughing our butts off so hard I'm surprised they didn't tell us to shush. 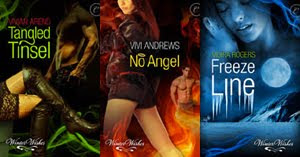 As any of you who are buddies with me on GoodReads know, I've been reading Winter Wishes this week which includes the novellas Tangled Tinsel by Vivian Arend, No Angel by Vivi Andrews and Freeze Line by Moira Rogers. I'm on No Angel which is superb up to the point I'm stopped at but I didn't care for Tangled Tinsel. I did sit down last night though and got a lot more of The Forest of Hands and Teeth read. I was going to watch The Walking Dead's finale but since the hubs had to miss last week's epi I figured I would wait until he could catch up and we could watch it together. I am so wishing I had read TFoH&T sooner it is exceptional. I actually got a bit sick reading one scene today and had to put it down for a bit.

Since I had to take a break to calm down after that grisly scene I went over to LibraryThing. I don't use the site much since I haven't taken the time when I have the money to get a subscription. 200 books is hardly enough for one blogger to list. It got me wondering what other sites there are in this vein. I love GoodReads and I tried Feed Your Shelf. I know of but haven't tried Shelfari. I'm curious which ones are favorites.

And on that note I hate to cut this short but I have got to get some stuff done around this house before it gets any later. Have a terrific week and if you've got any books on your holiday shopping list from Chronicle Books don't forget the 35% off + free shipping deal has been extended through the 12th! Just use the code FRIENDS at checkout. ;) -- Rhi
Posted by Rhianna at 12/06/2010

Hmm... book sites. I'm going to try out goodreads and see if I like it. By the way, I added you as a friend, so if you see a request from Koorihime-sama, it's me.