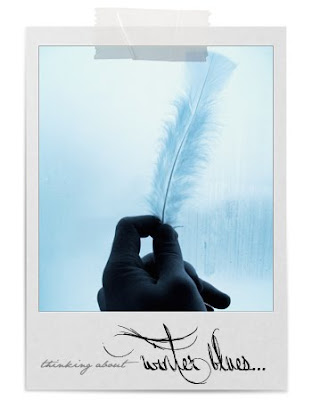 Please tell me it's warm somewhere! This past week our weather went from being unseasonably mild to New Years Nasty. *pout* This morning when I got up to take the puppy out we were at a frigid -14°F with a -30°F windchill. *shudder* As yucky as that extreme cold is it isn't unusual for the high plains where I live. We just don't tend to get it this early in the season, usually the week of Christmas and early January are our nastier weeks. Makes me want to hibernate! Alas, hibernation for humans is not an option. 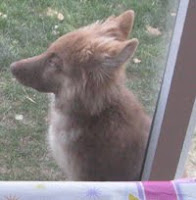 Even with the unpleasant weather life has to go on so it's been one of the busier weeks of my year. At the top of that long list of things to be done—amongst birthday planning for my big kid, Christmas shopping and parent-teacher conferences—was getting the puppy spayed. The pup is a pure bred German Shepard but ended up with the liver coloration instead of the red the breeder said she thought she would have. But she's a pretty pup and HUGE. She's only 4 1/2 months old and she weighs 40lbs! Her behavior and personality do leave something to be desired though. Which means we had to drive across town in this nasty weather to buy her an E-collar (aka a cone) to keep her from tearing the bandages off her feet (she had 2 very loose dew claws removed at the same time as the spay) or licking her stitches. But with the snow outside (about 6") we've had to come up with a solution to putting bags on her feet so she can go outside for potty time. The vet had IV bags tied on her feet with gauze and it just doesn't work well. So I found some winter gloves with bungie ties that can be pulled tight around your forearms... and I've been putting them on her back feet over the bandages! It's hilarious looking but she doesn't mind them and has been doing really well with her recovery.

With everything going on I have had to snatch little bits of reading time whenever I can. I was able to finally finish The Iron Duke! *happy dance* Must say it was flawless. I can't think of anything to say that's negative about it which is rare. I also got Mob Rules finished too and it is another book I am adding to my list for the guy readers I know. It was just darned good from dialog and characterization to originality and surprises. I'm looking forward to giving both great reviews when I have a little more time to think in reviewer mode.

I did a lot of cooking this week. I made a Butternut Squash and Cranberry Risotto that was killer. Even the hubs liked it—he's quite picky—enough to mention it to a coworker who called me asking for the recipe. I also made chicken soup from the stock up. Talk about daunting for someone who is freaked out by whole birds to cook. I don't think I'll be attempting to put a whole chicken in a pot again any time soon but it was an interesting learning experience and the baby LOVES the results. Both recipes I used came from Baby Love: Healthy, Easy, Delicious Meals for Your Baby and Toddler by Norah O'Donnell & Geoff Tracy a book I have been using a lot lately since the baby is in that between purees and true finger foods stage. She liked both the risotto and the chicken soup. Why am I bothering to mention this on my blog? Meh, well I enjoy cooking and I actually got this book to review from Vine a while back (that's my review at the top of the list) so I figured it kind of relates. :P

Still working on The Darkest Lie. As much as I like Gideon and Scarlet, I'm kind of bored. The plot is moving too slow for me. I keep falling asleep reading it at night. So last night I decided to skip it and focused on my YAD2 Challenge reading. The Forest of Hands and Teeth by Carrie Ryan is the one I decided to work on next. I had originally picked it up to read during the Steampunk vs. Zombies month I did earlier this year and never got to it. So far it's depressing which I suppose one should expect from a dystopian novel but with the gloomy weather outside making me blue it might be a bad choice to work on this afternoon. lol

In other reading I'm working on a few Ebook galleys and review copies I've received. Winter Wishes by Moira Rogers, Vivi Andrews & Vivian Arend is a Christmas themed paranormal romance/erotica anthology from Carina Press, Seducing the Vampire by Michele Hauf is a vampire romance coming out in January 2011 and To Kill a Warlock by H.P. Mallory is the first in her Dulcie O'Neil series and so far I loooove the hysterical dialog and well written characters. I'm barely started on any of the three but with it being Gena Showalter Month I am trying to get caught up on her books first. Maybe I have adult ADD? teehee! Easily distracted by shiny new covers... who me?

And what's happening with you my dear followers? Anyone baking up a storm in preparation for Thanksgiving? Or have you all gone into hibernation? ;) Whatever you're up to I want to know what you're reading this week! -- Rhi
Posted by Rhianna at 11/21/2010

The puppy looks so cute. ^^

For Thanksgiving, our neighbors invited us over, so I'm just going to make a couple of dishes and a cake to bring over there. ^^

As for Christmas, I'm still getting books. But I might have to get a biopsy done on my right breast because of a rash thing. The doctor says it might be folliculitis, so I'm doing that treatment. On the second visit, she said that if it doesn't clear up in one month, then I get a biopsy done. She said it doesn't hurt, but when the doctor says that, maybe 6 times out 10, it does hurt. So, I'm hoping it is folliculitis and clears up, so that way I don't find out it is something serious like skin cancer or breast cancer. I'm only 22, geez, I hate this. I need to find a way to get rid of my stress. ;___;

OMG Icy! *hugs* That is super scary! I've been dealing with my dad having skin cancer for a few years now and it never stops being stressful. Here's hoping your rash thing is not the Big C! Any special books you were hoping to get for Christmas?

Argh. I should so be in the kitchen putting the prep steps on some sweet potato flambe (sp?) also known as that dish with the sweet potatoes and marshmallows. My mom lit hers on fire by accident one year and so we still (20 years later) refer to it as sweet potato flambe. :P I made it last year to take to the inlaws and it was yuuuummy... and there were no flames involved lol.

One of my friends coming to stay with us at Christmas lives down in TX and when he heard how cold we've been he about crapped himself. Glad to hear the whole northern hemisphere isn't one big iceball cause even my family over in Washington said they had snow and colder temps than normal. No thank you. >:( I want to at least be able to go to my mailbox to check for books without my toes falling off.

Thanks for your kind words. Well, I don't think it's cancer because it looks like it is getting a little bit better. Though, I'm being biased since I don't want it to be serious. :X

I won't be able to get books for Christmas this year. I had to get a new tower since the motherboard on the tower I used to had died like two or three days ago. It was either books and no computer or computer. I picked computer. Hopefully, this one will live for a loooooong time. Luckily, I was able to get one during the Black Friday sales. \o/

Yeah, cold weather is no fun. I actually hibernate during winter. >.< Thanksgiving was really fun. I ate a lot. :P