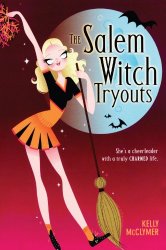 The Salem Witch Tryouts Salem Witch #1) by Kelly McClymer
Urban Fantasy, Young Adult, Witches
Trade Paperback (SIMON PULSE, 272 pages, $8.99)
ISBN# 141691644XPrudence Stewart had it all at Beverly Hills High: straight A's, the cutest crush, and a sweet gig as captain of the cheerleading squad. Then poof! Mom and Dad announce they're moving to Salem, Massachusetts. Turns out, Pru comes from a long line of witches and it's time for her to learn the craft. Buh-bye, Beverly Hills High -- hello, Agatha's Day School!
But Pru's not about to trade in her spirit stick for a broomstick! She's sure she can keep her kewl at her new school -- until she discovers it's all magic, all the time, and she's failing Witchcraft 101. Worst of all, even the cheerleaders bring a special "spirit" to their routine. As in, triple-back-somersault-with-a-twist kind of spirit.
It's time for Pru to cast a spell and prove she's just as enchanting as the next girl -- and somehow make cheering tryouts a flying S-U-C-C-E-S-S!
Author Site: www.kellymcclymer.com


No Matter How You Spell It (4 stars)

At Beverly Hills High, Prudence Stewart was a shoe-in for head cheerleader. She had the perfect grades and the perfect guy to drool over... until her mom and dad decided it was time for Pru and her brother to start learning to use the magic they've been denied for years. Which means not just leaving behind sunny California for dull Massachusetts but leaving behind the only lifestyle they've really known. While her little brother might be totally okay with the change, Pru is anything but happy!

If there's one thing that can save Pru from loserville at her new school it's joining the cheerleading squad. If only the girls at Agatha's Day School didn't do their routines in the air. Hopefully with a little tutoring and a lot of practice Pru can catch up in her magic studies and master the fine art of cheering with a witch squad. Maybe, just maybe if she does she'll get her cool factor back and fit in with her peers just magically.

If you're looking for something with a little more humor and a lot less angst, The Salem Witch Tryouts is a good place to start. The whole Beverly Hills cheerleader thing has been done in urban fantasy before but doesn't lose any of it's charm with this one. Pru isn't the snotty cheerleader one might expect though she does have some snobby moments and certainly thinks very highly of herself. Going from being Miss Popular to remedial magic student would certainly be tough on any young woman but she handles it with a decent dose of positivity and determination.

Overall this was definitely on the lighter side of urban fantasy but I personally love witch stories and thought this one was really cute and funny. The world of magic that McClymer has set up for this series is fairly unique and Agatha's Day School is definitely not Hogwarts but could appeal to that same audience if they were looking for an Americanized witch school. I really had a good time reading this book because of the lighter tone and my only real beef was the text-speak conversations tossed in between Pru and her friend back in Beverly Hills.
Posted by Rhianna at 5/30/2009