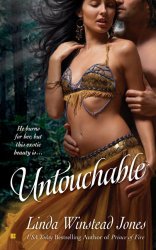 Untouchable (Emperor's Brides #1) by Linda Winstead Jones
Paranormal Romance, Fantasy
Mass Market Paperback (BERKLEY, 304 pages, $7.99)
ISBN# 0425222969
Released: August 2008 (Reviewed: August 2008)The Emperor of Columbyana is in need of a bride. Riders have been sent to the far corners of the kingdom to bring back six noble beauties for him to choose from. But none can compare to Sanura, an exotic slave with the power to see into men's souls. To touch her is said to bring incredible pleasure - and certain death. Even for the emperor's twin brother, Prince Alixandyr.
Alix is charged with bringing this rare creature back to the palace. A man possessed, he has wrestled the darkness inside him since birth. He cannot afford to desire Sanura, but the attraction between them is stronger than his darkest impulses. Even if it means his own destruction, he cannot allow the emperor to claim her.
Sanura is a proud woman of great power, reduced to a plaything for the rakish emperor. She wants nothing more than her freedom - except perhaps Alix. He is a mystery, the first and only man whose true soul remains hidden from her. As their passion threatens to unleash the demons within Alix, Sanura must do all she can to save the man she loves and prevent him from committing an unforgiveable sin ... Author Site: http://www.lindawinsteadjones.com/

In Jones' Fyne Witches trilogy a pair of twin sons are born to Emperor Sebestyen of Columbyana. Now adults, Emperor Jahn and his moments-younger twin, Prince Alixandyr begin an adventure to find a bride for the Emperor. There is to be a contest, six women of worth from varying lands are to be brought to the palace to be offered the chance to be Empress. Messengers are sent to the far places at the height of the Spring Festival to return with the ladies in time for the Summer Festival where Jahn will choose his bride.

Princess Edlyn of Tryfyn's father is noted to not want his daughter traveling with just anyone so Alix is sent to retrieve her. While at the King of Tryfyn's court the new Queen demands that Alix bring a gift back to the Emperor along with the princess. Painted blue and scantily clad, Sanura is a woman of the Agnese. Gifted with the ability to see into the hearts of those around her she must never be touched by anyone save the man who owns her. One small touch and the blue which covers her skin will mark anyone who dares touch her for death. When Alix hesitates to take the pleasure slave the Queen makes it known she will kill Sanura instead so he takes her with them on their journey.

Through her gift Sanura can see that Alix is a good man, but there is a darkness within him she doesn't understand. His attraction to Sanura goes denied for much of their long journey until his dark side breaks free. When one of their traveling party is murdered and Alix and Sanura are blamed it is his dark side that saves them. But will the darkness ever go away? Can Alix desire and love Sanura without risking his very soul? Can Sanura save Alix from himself?

Fans of Jones' writing will love this first in a new trilogy. It has all the great elements she's come to be known for- epic storytelling, sensuality, strong character development and while she focuses on Sanura and Alix, she still takes time to tell more of the overall story of the trilogy. Tying into her Fyne Witches trilogy and the Children of the Sun trilogy you can enjoy the continued world building. But if you haven't read them, this story can stand alone well enough that you can easily go back and enjoy them later if you like.

My only complaint with this book was how abruptly it ended but due to this being about the Emperor finding a bride too many details of what the future holds for Alix and Sanura would have required giving away the rest of the story. We will just have to wait for 22 Nights (the second book in this trilogy) to find out. I personally can't wait!
Posted by Rhianna at 1/13/2009