Greetings and happy hump day readers! This week I am working on the second book in the Cat Star Chronicles, Warrior. About a year ago the first book in the series, Slave, popped up on my recommendations list on Amazon.com. I had no idea what it was about and at the time it didn't even have a cover but I wishlisted it and watched for it with much anticipation. The cover, of course, was one of those really chesty ones which normally turn my ears red but when the premise was added I knew I was going to either really love or really hate the series. I am a little bit of a slow reader at times but I burned through it in a couple of days. The book got a lot of mixed reviews, people either loved it or hated it just as I had expected. I LOVED it. Couldn't wait for Warrior to come out! I figured since I am going to be burning through it in what little spare time I have this week I'd post my review for Slave today. Enjoy! -- Rhi 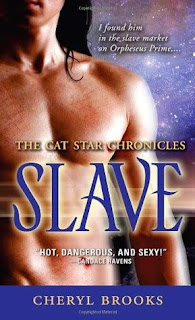 Slave (The Cat Star Chronicles #1) by Cheryl Brooks
Paranormal Romance, Sci-fi Romance
Paperback (SOURCEBOOK CASABLANCA, 320 pages, $6.99)
ISBN# 1402211929
Released: April 2008 (Reviewed: June 2008)
"I found him in the slave market on Orpheseus Prime, and even on such a god-forsaken planet as that one, their treatment of him seemed extreme." He may be the last of a species whose sexual talents were the envy of the galaxy.Cat is an enslaved warrior from a race with a feline gene that gives him awesome beauty, fearsome strength, and sensuality and sexual prowess unmatched by any other males in the universe. Even filthy, chained, and beaten, he gives off an aura of power and virility and his feline gene gives him a special aura.Jacinth is an intergalactic trader on a rescue mission and she needs a man she can trust with her life.She has spent years pursuing her kidnapped sister from planet to planet. Now her quest leads her to a place where all the women are slaves. "Jack" needs a slave of her own-one who can masquerade as her master.Enmeshed in a tangle of deception, lust, and love, they must elude a race of violent killers and together forge a bond stronger than any chains.
Author Site: http://www.cherylbrooksonline.com/

Jacinth, better known as Captain Jack, is in the market for a slave. Not just any slave will do. She needs a man, one who can clean up nice enough to pass as her master and not stab her in the back. Six years ago, Jack's sister Ranata was kidnapped and sold into slavery by Nedwuts. Naturally, Jacinth is doing everything in her power to hunt down her sister and free her. But as it turns out Ranata is currently enslaved on Statzeel, a planet where all females are slaves to the males. The only way to get close to her sister and hopefully rescue her is to put on a collar and chain herself to a man she can trust not to put her in the same boat as her sibling. When Jacinth finds Cat--as she quickly nicknames him--in the slave market, he's naked, dirty and looking mighty feral. But there's just something about him and she ends up buying him even though she immediately frees him and decides to find another way to save her little sis. Believed to be the last of his kind, Cat has nowhere else to go so he finds Jack and the two set off to find Ranata come heck or high water.

If the warning above wasn't enough, let me state again... this book can get a bit graphic. You should be very comfortable with the male anatomy and sex in general before diving into this one because much of the story centers around Cat's nether regions and the sexual behaviors of most of the planet Statzeel. It's erotica done light, with the love story of a romance and the adventure of a sci-fi novel. What really made this one stand out for me as a reader was the clever dialog and (though raunchy at times) the inventiveness of the author. Cat and Jacinth were fairly enjoyable as characters, though they felt a little unoriginal, cliched even. I don't know if it was the authors intention but I laughed a lot throughout the story as the dialog and some situations were just hysterically silly.

For a first novel this is a really good one and I very much look forward to reading more from Cheryl Brooks!
Posted by Rhianna at 10/08/2008